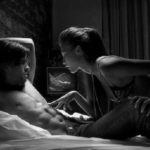 We are going to start with a shock to the system and introduce some excitement in the bedroom. Don’t be afraid to introduce some toys in the bedroom. My first recommendation is to buy some restraints. Now they don’t need to be expensive, just something that can help you hold your man down. I’m sure your man, just like mine, is strong and can overpower you if he really wanted. Which is great because let’s be honest, who doesn’t like to be dominated? But if you like a strong man to take charge, is it too hard to believe that your man would like a strong dominant girl too from time to time. Here is how you both can get what you want. Tonight I want you to dress in your man’s favorite outfit and seduce him. Tie him down to the bed and tease him relentlessly. Massage him, kiss him, lick him, be the dominant girl he always wanted. Don’t even touch his manhood until he is begging for it. Explain to him that you want to play a game that you think he will love. A game where his MANHOOD WILL BE GETTING LOTS OF ATTENTION. But inorder to play there needs to be some ground rules set early in this game. One – you make the rules, not him. Two – he is never allowed to play with himself or finish without your permission. Three – if he breaks any of your rules the game is over.

After getting him to agree, which he will do in a second… tell him that he gets to finish only if he gives you the best orgasm he has ever given you before. And watch him go to work, showing off his manliness. As soon as you have finished, you are done for the night. Yes, I know what you are thinking… What about him? Well he is going to learn real quick that it’s no longer about his pleasure. It’s all about yours. Tell him, you said you would let him finish but you never said anything about him finishing tonight. Explain to him he will have to work for that orgasm, you love him, and kiss him goodnight.

A nice little set of ideas for introducing him to chastity here. I know that the reality is mostly it’s the guys who want it and have to introduce it to us but some fun and hot throughts in these four posts!