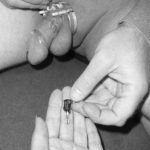 Not letting him have the key is important

Just a little titbit but I had an interesting conversation with hubby about ‘key management’. As with most padlocks we have two keys, and mostly we’ve just kept one of them somewhere we both knew, while I had the other. However he mentioned that it’d be hotter if he didn’t know where the other one was and so had to ask if he needed it for some reason. Simple enough! Key moved, job done!

And for emergency access… firstly these things aren’t inescapable unless you have a piercing, so he COULD get it off even if he had to break it. But secondly if I was going to be away then we’d just leave an emergency one somewhere he could access it – after all this works on trust at the end of the day.