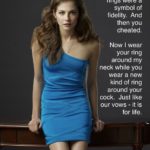 I liked this caption and then started to think about it seriously, how our exploration of chastity might effect the discovery hubby had cheated on me (and by that I mean like kissed or similar another woman – he’d be in much more trouble that that for any more). And I thought actually I’d use a cock cage in that situation now, I think.

I’d have him agree to be pierced as a sign of repentance, and then while that heals up, lock him up in a cage with NO release at all for a couple of months (not that I’d tell him how long it was going to be). Then when healed, we’d put a prince albert cage on him (which is then inescapable) and probably keep him constantly in that for another month or two, and then, when finally I felt like letting him out to edge him, explain he’d be locked in it for at least a year before I let him out of the house without it (maybe more given the offense). Of course if he didn’t agree I wouldn’t let him out at all…

Second offense would be caged for life.

I’d be quite happy with that as a theoretical punishment I think!

← My husband just got caged last night. I am over 40 years old and pretty much a prude! I have never been the aggressor so I am freaking out! I want to please him but how do I start out so I can ease myself into this roll? Any suggestions would be great. Thank you!!
Next Post →