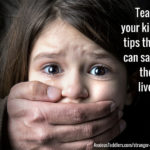 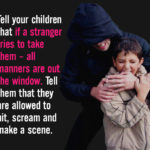 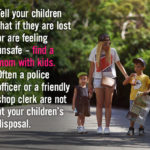 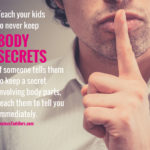 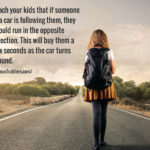 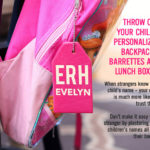 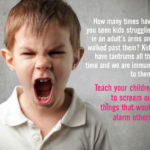 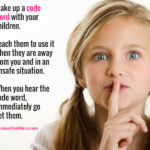 Tips That Can Save Your Kid’s Life.

When I was a child, from the time I was about four and could understand things, my mom told me and my brother that we should have a secret word. That way, if we were ever in trouble or felt unsafe and we didn’t want the people around us to know we needed her to come get us, we could let her know. So she let us pick the word and my brother and I chose the phrase “peanut butter cups.” (I’m happy to share the phrase now since both my brother and I are adults now).

I used the phrase twice in my life. Once, I was at a friends house when I eight years old. Her dad got really drunk and was throwing things against the wall. I was really scared and I didn’t want to draw attention to myself on the phone when I called my mom to come get me because I didn’t know if he would get more violent if I asked her to come get me. So I called her and was calm and after a couple minutes I asked “Hey mommy, did you get me those peanut butter cups from the store?” And she said “I’ll be right there.” And she came and got me within minutes.

Second, I was a teenager spending the night at a friends house. Her brother and dad were drinking and they started talking about things that made me uncomfortable – ie: what they liked to do to women. My friend didn’t seem perturbed and said that was normal for them and that I shouldn’t worry. But I was worried because they were really drunk and I was 15 and the only ‘woman’ around that wasn’t related to them. I went in my friends room, told her I needed to call my mom and say goodnight. Before I hung up with her I asked “Next time we go to the store, can we get some peanut butters cups? I’ve been craving them.” And she came and got me, just like that.

Two incidents, one as a young child, one years later as a teen. Don’t discredit this stuff, it fucking works. My brother used it a few times too. Let your child pick the word and no never, ever, ever, ever get mad at them for using it no matter what it is.

DO NOT SCROLL PAST THAT.

As a mum I thought this was just too useful and important not to repost.