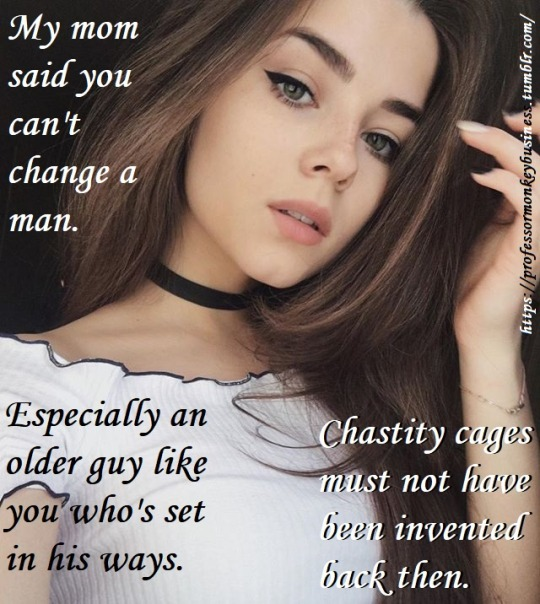 For those of you not familiar with the term, as it’s a mostly European thing, an Au Pair is a young woman between 18-25 usually, who stays with a family to help them look after the children, in return for food and board plus a small allowance. It’s a traditional way of European women taking a gap year and improving their language skills. It’s also one of hubby’s favourite fantasies which I’ve grown to enjoy too – the idea of a beautiful young woman joining our household, and me teaching her the power of chastity, to my poor hubby’s ultimate frustration. So here’s at least the beginning of a little story about it:

She’d had a message from her a few months back, via her anonymous chastity blog. Just a simple message, saying how much she enjoyed reading about it and hoped to find a man to deny herself one day.

They’d got chatting, and when Madeline had shared she was planning a gap year, a plan had begun to form.

‘Have you thought about being an au pair, Maddie?’ Penny asked her one day.

It turned out she had but it was too late to get a place with an agency, plus she’d be nervous just ending up with some strange family, stuck with them for six months.

‘Well I can’t promise we’d not be strange but, we have two young kids, and I’ve talked to hubby about it before. Would you like to come and au pair for us?’ she asked.

‘Really? That would be so much fun, and your kids sound lovely, just like my little brothers. But, wouldn’t it be strange, me knowing about, you know…’ Madeline paused.

‘Actually, that could be part of the arrangement, if you wanted it. Would you like to learn more about how chastity works, how to tease a man, and get some real experience?’

‘I’d like that very much, I can’t believe it, this is perfect. But what will you tell him?’

‘Oh I think we’ll keep it a surprise, for now. Okay, we have lots to plan, let’s start thinking how this is really going to happen…’

Penny and Madeline got to work. Despite appearances Maddie had very little experience with boys, or with sex at all. So Penny advised her on some blogs to read, and recommended trying some edging, so she’d have a better appreciation of the impact it had.

‘It’s how I started.’ Penny explained, ‘It’s what really opened me up to all this.’

‘I think I just came reading that,’ Maddie joked.

‘Enjoy it while you can,’ teased Penny in response.

That had been six weeks ago, and now was the day of Madeline’s arrival. Poor hubby didn’t know what he was in for. Penny had told him that a last minute au pair had come up, and no, they didn’t let you have pictures any more, but she seemed ideal. She even teased him about all his fantasies, but made it very clear that’s all they would be. The girl was there to help with the kids, not be the object of his perverted dreams. Although that didn’t stop her whispering some of those fantasies to him as she edged him over those weeks.

They waited at St Pancras station as the train from Paris disembarked. As instructed, Madeline had waited for everyone else to leave and waited a couple more minutes before climbing from the train in the high heels she was only just getting used to. Her entire, innocent but very attractive outfit had been picked and bought in advance by Penny.

And it was everything Penny had hoped it would be, as she stood in front of him, rubbing herself against her husband’s caged cock, pointing at the solitary girl sauntering up the platform.

‘Holy fuck, do you think that’s her?’ he blurted out before she came within earshot.

She turned back and gave him a smile, ‘You know, I think it is.’

She paused. ‘You are so fucked’ she whispered, before turning back and throwing her arms open, ‘Madeline? Bonjour! Welcome to England!’

I hope you enjoyed that, perhaps I’ll write what happens next if there’s enough interest!