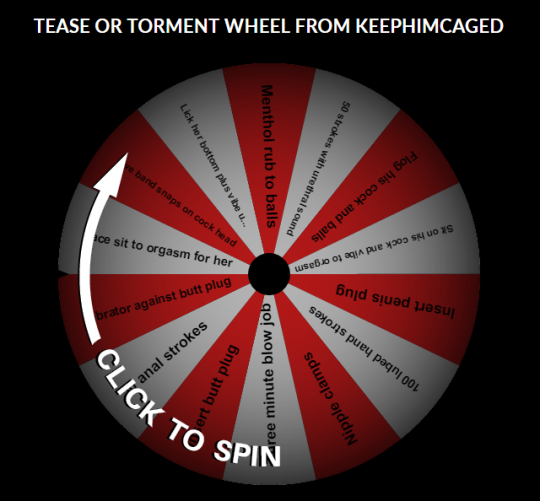 The Tease or Torment Wheel

So one of our Locktober tasks was to go through your toy collection and make use of ones you haven’t used much.

Hubby came up with a game that makes use of that which we are planning to do this weekend, and I thought you guys would like to see it too!

The Tease or Torment Wheel

Of course your toys would vary, but this is really easy to change, just go down the page and adjust the options to what you do or don’t own, or do or don’t want to do, and apply the changes!

We’ve set it up so they alternate, tease (white) and torment (red). Some of the teases are for him, some are rewards for me, but you can change it however you want.

It’s a pretty loose game to be honest, just sometimes it’s fun to put the element of chance in, but there are a few key things to the way we’ll play it.

This game should have safewords, as it does involve torture. We use ‘Red’ for stop and ‘Amber’ for ‘Don’t stop but I’m close to what I can stand’.

Then I’ll spin for real and follow the instructions, but really be as flexible as I fancy. We put some guides on strokes or time on some of them but vary it as you want. You can hit the button a few times to keep it spinning for longer if you want. It should work fine on a tablet or phone so you can show him as it spins.

There are a few insertions, butt plug, penis plug, nipple clamps. Basically decide if you want to leave them in place or take them off as it progresses. Some will need you too, others won’t. Just use common sense.

‘Band snaps’ are an elastic band around his cock that’s pulled back and let go.

For sitting on his cock you can either have him in you or just grind on him. For face sitting I like to blindfold him but it’s up to you.

Hmm, actually now I think about it, that’s a perfect end to the game. Once you want to finish, spin the disk, don’t let him see the result, just say something like ‘ oh lucky you!’ as though he won an orgasm…

Untie, clean up and cuddle!