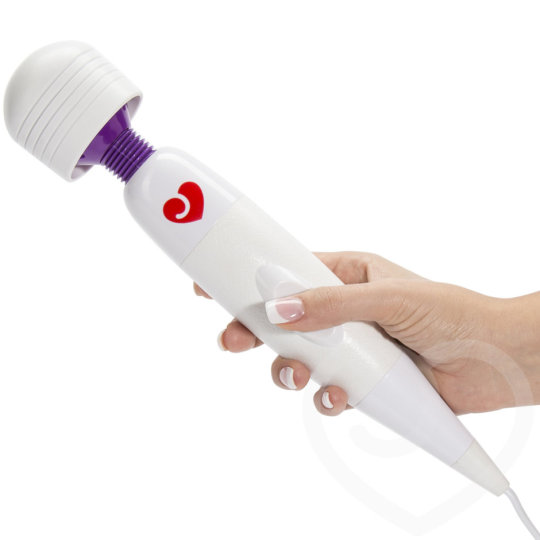 Well noticed! We have the Lovehoney own brand Magic Wand now, it’s much, much better than the classic Hitachi Magic Wand which we used to have as that one only has two power settings, High and Meltdown! Really, it’s crazy.

I double checked and if you’re in the US then you need to get a different one, which comes with the US plug called the Doxy.

This link should take you to the right one

So yes, the Lovehoney own brand one has a variable speed dial (the doxy has buttons but is still variable) which is absolutely what you need – we hardly ever get past half way!

You have to be a bit careful with it as it’s so powerful it can quickly numb you, so start slow, and keep it moving, just a bit.

Never run out of batteries

So it’s also one of my favourites to use when he’s locked in his cock cage, you know the one where you deliberately use a vibe in front of him… because it’s just so obvious and big.

But the other use for chastity play is to press it against his cage as a way to stimulate him without even removing it. Or for us, what’s much more effective is to press it against the base of a butt plug that is in him. Definitely the easiest way to achieve the whole prostate orgasm, again, you can do it while he’s caged for a real mind fuck.

And this last thing to do with them, probably the kinkiest of all… you can, actually use it to give each other massages! I know, I thought it was just an excuse, but it works pretty damm well pressed into the right spots on the back particularly. But try not to use it too much like this, it is a sex toy after all 😉

The truth about vibes

As a PS, you know MOST women don’t use a ‘standard’ vibe for penetration, right, even though they are that shape? They can just about hit your g-spot but mostly we just push them on our clits. Definitely worth getting a good rechargeable USB vibe too if you haven’t already. We use a Rocks Off one which is fabulous but seems to be out of stock, but we also have this one which is just as good, by one of the luxury vibe makers, Lelo:

It’s hubby’s job to make sure it’s always charged, if we’re ever using it and it runs out, he gets locked back up, which is fun!

But most importantly and why I feel so happy recommending them, they give you 365 days to try anything you buy, and send it back for a full, no quibble refund if you don’t like it. That’s just brilliant! We genuinely take advantage of that, if we don’t like something, for whatever reason, we just tell them and we can post it back and get our money back (or more often the case we just try something else instead! lol)