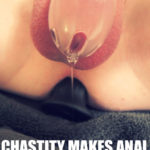 It needs to be a plug that’s comfy for him to wear though. Most are awful designs. The ones we highly recommend are the Roll Play plugs that are silicon, a lovely shape that sits very subtle inside, but most of all feature a ball inside that moves around and reminds him it’s there (yes otherwise he can forget – although his constantly dripping cock is a pretty good reminder lol).

Probably my favourite thing though is him being plugged, caged and then using the strap on on me, as the ball rolls around right against his prostate and drives him crazy while he fucks me – so hot.

(Lovehoney have a special offer of 2 plugs for £15 (or $20) on right now which includes all three sizes of these – bargain!)

Relief can only come with an orgasm, and denial of that will end in nothing but pain in the form of what’s commonly known as “blue balls”.

But there’s a word in here that I totally LOVE:

Damn, I’ve become a Masturbatrix! And I love it!

I think my favourite thing with ruins is denying my husband long and hard enough that even though he doesn’t want to be ruined, he starts to crave it because it’s all I might let him have.

And then of course, how about promising a ruin and then denying him that too!