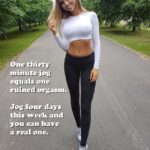 His wife had bought him a series of special personal trainer sessions – he couldn’t believe it when he first met her, but when he saw a very familiar key in her hand he began to understand just how screwed he was.

I couldn’t resist trying a capiton on this but actually the whole area of exercise with denial is really interesting. We’ve thought about trying it and something like this is what I had in mind, although a ruin for each jog is totally the wrong way to go about it. You’re losing all the motivation with each ruin!

No, the way I think I’d try it is he ONLY gets out of his cage for an edge, by me or him if he’s done his running or weight training each day. If he’s done six days of cardio and or strength exercise that week then on his rest day, say Sunday, he gets a long, sexy, edging with a ruin (but don’t waste the protein :P). You can use something like Google Fit to track it all so that’s easy!

Then set the next target as a couple of kilos lower, and they are ruined until they reach that – I’d say a couple of weeks between goals as the average is about right.

And then have an ultimate goal weight – worked out using health body mass index figures and some reality too, and of course some suitable celebration for achieving that – and a bit of an end to this process, for now. Time to explore just what your fitter, slimmer lover is capable of. Hopefully all the above has become a habit – but keep a regular eye on it, as it’s all too easy to slip back up again. So the weigh ins should still be regular and shared, and his orgasms lost if he starts to falter. It’s for his own good, isn’t it!

Anyone actually tried something like this? I’d love to hear if it was at all successful. 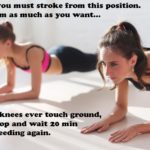 I’m not clear how he’s supposed to stroke himself in that position, but it gives me a good idea for an exercise task. Get him to ‘plank’ in bed next to you and very simply he’s stroked by you for as long as he can hold it!