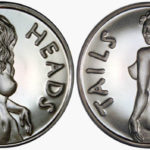 Coin Flip Rules For My Husband for 2016.

Any tail means he gets denial, and his head-count is reset to zero.

If he manages to get five heads in a row without getting a tail, he
earns the rare and coveted orgasmic pussy sex, and his head-count is reset to zero.

I love this blog and I’ve seen their ‘coin flip’ rules before but now there’s an illustrated version!

The reason I’m particularly interested in this is because I’m naturally submissive, while I love denying hubby and I’m getting better at being mean etc which I know is hot, all the decision making is actually quite tiring and I get ‘domme fatigue’ after a while.

Secondly the decision of whether to take the reward, or gamble it and go for a bigger one is HIS. I don’t have to stress about it. I just have to make the ruin/orgasm as enjoyable as possible when he does claim it.

So I’ve chatted this through with him and we’ve amended the rules a bit and have been trying it with some success!

So, some different rules we are going to try. (This is to be used whenever I don’t fancy taking charge).

It’s only a one in 8 chance of getting three heads in a row, that’s pretty low. So here’s my list of rewards.

On top of the coin results I tend to give him one or two edging sessions each day. A quick rub if he’s taking it off to shower in the morning and if I’m in the mood, plenty in the evening.

ALL rules are subject to my decision. This gives me the scope to ‘be mean’ if I want to, similarly I can decide I just want a normal evening.

This is a bit different from time periods we’ve done before as he’ll be coming fairly regularly from it (in theory at least) so there’s no set time we’re going to try this for, but a two month trial sounds reasonable (he’s just discovering that as he reads this, lol). We can always stop if I think it’s not working 😛

What do you think? Like my ideas or the original better? Feedback and adapations always welcome!

← Say that tomorrow, your husband said that he was tired of this lifestyle and wanted to quit. What would you feel, and how would you react? Also, does he read this blog?
Coin Flip Log →