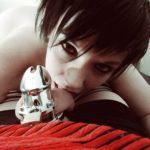 The main point of enforced chastity is to transfer control of the caged male’s sexual pleasure from him to his keyholder. It is a power exchange. As keyholder you need to maintain his sexual desire throughout his waiting time. He has to be desperate for release in order for him to truly feel sexually controlled. To keep him that way, you will need to stimulate him on a regular basis without providing him the opportunity to orgasm or ejaculate.

An ultimate expression of your power is to replace his scheduled orgasm with a ruined one. This is very frustrating to the male and will imprint strongly that you, in fact, own his pleasure. Since ruined orgasms do reset his physical need for orgasm, if not his mental one, they should not be intentionally given before his scheduled release date.

Sex for you is independent of his pleasure. You should use him to give you orgasms whenever you desire them. If you want intercourse without him ejaculating, you will have to train him to hold back. This can be done through punishment for accidents and with training aids: multiple condoms and/or numbing cream.

Your male has asked you to control his ability to get sexual pleasure. It’s up to you to assert that control and have fun in the process!

So this is the essence of what we do. But I think the big difference with what most chastity blogs on here say is that we don’t do it for crazy long amounts of time! It can be as little as a few hours, or a day or two most often. We’ve done it for a week as the longest time we ever did it. And then we rarely put it back on again after that denial has finished, we do other stuff.

However, the cage does come off MOST DAYS, as for me the intensity of it isn’t about how long I’ve kept him denied but edging him every day (or even a few times a day) and then putting the cage back on.

With the week long denial I’d unlock him first thing, quickly wank him for about three minutes, and then send him to the shower, he was allowed to wash, yes touch, but not wank, and then I’d put the cage back on him. Then pretty much most nights (five out of seven maybe?) we played for about an hour which was a mix of him pleasing me and then finally taking the cage off while he was restrained, edging him a few times, leaving him like that as I read a book and putting the cage back on when he’d gone back down.

Yeah, it was insanely sexy, for us both.