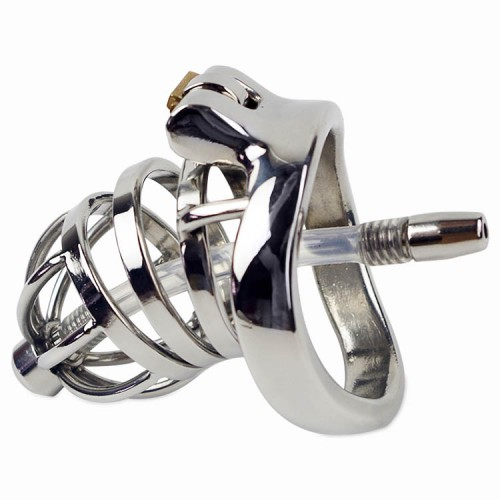 If your husband had to run a 10K in one of these, which one would he chose? When I run, I use a lot of Body Glide to prevent chaffing. I suspect you can’t do any strenuous activity in a cage without significant adverse consequences.

Hubby goes to the gym and runs in his and it’s been fine, nothing that long distance though. I guess you have to be slightly aware of everything swelling a bit when you do extended runs?

I asked him and he said the new Arc one we’ve been trying. Although it’s a bit heavier it’s super comfortable and the important thing is the end covers him better so no chaffing when running on the tip (which he says would be really bad…). We dont’ use the tube as in the picture below, that’s optional! (VERY optional).

He has run in his CB-6000S in the past though which has the advantage of being lighter and completely encasing him, but it’s a big less comfortable than this.

Also our standard metal cage that he wears most of the time he jogs in regularly – the Tight Squeeze is lighter but the tip is a bit more exposed but I’m sure it would be fine. I personally think this is a better bet as it’s the lighter of the two.

Remember to properly lube it all up with some good lube and a very tight pair of underwear and you should be fine! Also make sure you have the key with you in case of emergencies.